ISLA VISTA, Calif. — Seven people were mowed down by a radical men’s rights extremist this morning after he complained of “being rejected” by women on extremist web sites.

Elliot Rodger, 22, went to a residential hall at California-Santa Barbara (west-northwest of Los Angeles) and gunned down seven women and he attempted to mow down more people before he was killed by Isla Vista Police Office deputies.

On Youtube, Mr. Rodger had a video called “Retribution“, a video that detailed the gunman’s plan right down to the nitty-gritty to carry out a prolific and premeditated massacre, for the most violently sexist and entitled reasons.  There is also written evidence, most of it on a web site called PUA Hate, a site that is dedicated to bashing and relentlessly attacking pick-up artists and women alike.

In the video, Mr. Rodger sits in his car, details his life of “loneliness, rejection, and unfulfilled desires,” specifically blaming women for not welcoming his advances, angry that he was still a virgin.

“College is the time when everyone experiences those things such as sex and fun and pleasure. But in those years I’ve had to rot in loneliness. It’s not fair. You girls have never been attracted to me. I don’t know why you girls aren’t attracted to me. But I will punish you all for it.”

“I’m going to enter the hottest sorority house of UCSB and I will slaughter every single spoilt, stuck-up, blonde slut that I see inside there. All those girls that I’ve desired so much, they would’ve all rejected me and looked down on me as an inferior man if I ever made a sexual advance towards them.”

“I’ll take great pleasure in slaughtering all of you. You will finally see that I am, in truth, the superior one. The true alpha male. Yes… After I have annihilated every single girl in the sorority house I will take to the streets of Isla Vista and slay every single person I see there. All those popular kids who live such lives of hedonistic pleasure…”

There is also his final YouTube video, made anywhere between a month to 24 hours before the massacre (Amelia McDonell-Parry does not disclose the date of this video).  This is the reason why I tagged this News Briefs as Not Safe For Work.

It is a disturbing case of a view held by some men that all women owe them sex, love, their bodies and their lives.

On his Facebook page, Mr. Rodger says that he is the son of Hunger Games assistant director Peter Rodger, and he grew up in a privileged neighborhood.  The PUA Hate site is a soapbox for men to vent and hate.  The thread from today shows other commenters discussing Mr. Rodger’s shooting spree.  That site has since been shut down.

Mr. Rodger legally owned all of the guns that he used to slaughter the innocent people minding their own business, a Santa Barbara County Sheriff’s officer told Fox News.

Mr. Rodger’s parents warned the Isla Vista Police Office about his plan to make good on his threats to slaughter blonde women.

The same things that I mentioned in Kenneth Myers’s 2011 massacre that rocked the town of Wagener in Aiken County can be applied to Mr. Rodger in this case.  Here is his manifesto, if you want to read it.  It makes me wanna retch.

LOS ANGELES — Another singer has become brainwashed by the anti-choice liars.

Toni Braxton wrote in Unbreak My Heart that she believed that God “punished her for having an abortion” that led to her 11-year-old son having autism.

Ms. Braxton found out she was pregnant when she took a drug called Accutane, a drug so dangerous to fetuses, some doctors prescribe it as a birth control pill.

Ms. Braxton said she had to terminate the pregnancy, but only with “major misgivings.”

“I was suddenly faced with a choice I’d never thought I’d have to make.” she said. “Amid my major misgivings about abortion, I eventually made the gut-wrenching decision.”

“In my heart, I believed I had taken a life,” Braxton said, “an action that I thought God might one day punish me for…My initial rage was quickly followed by another strong emotion: guilt. I knew I’d taken a life.”

Years later, retribution came, she said, “I believed God’s payback was to give my son autism.”

And she also gave a nod to the anti-vax lobby with some other stuff she said.

But, blaming abortion for autism?  I call bullshit on that.

Women are the keys to Democrats holding on to the US Senate, winning state legislatures and Governor Mansions

Pundits see women on the ballot as the firewall that prevents the GOP from getting the 51 seats necessary to take control of the US Senate for the next two years.  (NOTE: Democrats will control the Senate should it be 50-50 by virtue of Vice President Joe Biden, who is the President of the US Senate.)

If Grimes or Nunn could seize Senate seats now held by Republicans, it would greatly help the Democrats offset expected losses elsewhere and perhaps stymie the GOP from gaining the net six seats it needs to win majority control.

And should incumbent Sen. Kay Hagan (D-N.C.) hold off Thom Tillis, the author of the motorcycle-vagina law that shut down every clinic in the state except for one in Asheville, it would further boost Democratic prospects in what otherwise still looks like a challenging year for the party, despite the vulnerability of GOP candidates in South Carolina, Florida and (increasingly) Texas.

Sen. Hagan is getting help as Planned Parenthood is in North Carolina to tell people the truth about Tillis.

There are good reasons why the Democrats are using the playbook from 2012 this year.

Most importantly, Greenberg Quinlan Rosner Research and Page Gardner both say that women will not vote for Democrats if they are not focused on the GOP’s war on their rights in a memo last month.

However, the GOP has one woman that is a major threat to the Democrats’ control of the Senate: Monica Wehby in Oregon.  Unlike the other GOP candidates on the ballot, she is verifiably pro-choice and was viciously attacked by anti-choice activists in a bruising primary.

UPDATE @ 22:23: Santa Barbara County Sheriff’s officers said that 100% of Mr. Rodger’s guns were legally owned. We decided to add that information on here.

UPDATE @ 22:28: The PUAHate site is now down.  We included an archived link to the site here.

NORTH MYRTLE BEACH — Looks like the out-of-control North Myrtle Beach Police Office has taken a page from their despicable brethren down US Route 17.

On Mother’s Day weekend, North Myrtle Beach police deputies illegally arrested six people and illegally charged all of them, and one more, with “public nudity”.

The seventh person was arrested for disorderly conduct, which makes that arrest legal.

Police observed the six law-abiding citizens and lone suspect disrobe to their underwear and run into the ocean.  Deputies identified themselves and had all of the citizens who did absolutely nothing wrong exit the water and then illegally ordered each one of the septet to re-clothe themselves.

The lone suspect was drunk.

This bring the total of illegal arrests along Coastal Horry County to 13, and the number of illegal charges to 14.

We will continue to expose Horry County’s atrocious war on the civil rights of nudists and naturists, no matter how much the government hates it. 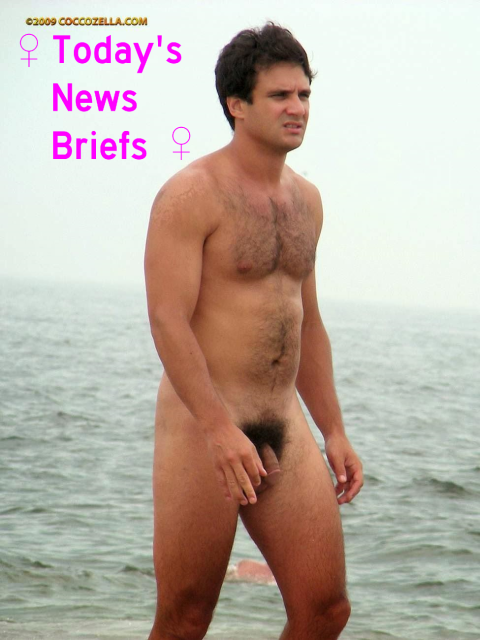 MYRTLE BEACH — The gymnophobic cops of the Myrtle Beach Police Office are at it again with their illegal arrests and it is way past time we send the message by nationally blacklisting the entire city.

On Tuesday at 2:30, the MBPO illegally arrested and unlawfully imprisoned seven students who were having harmless fun on the beach.

The deputy that made the illegal arrest heard them diving into the Atlantic Ocean near NORTH 74th AVE.  As a courtesy, the students did get dressed at the presence of the deputy, although they did not have to under the federal laws that trump municipal law on nudity.

This is the kind of shit right here as to why I am issuing a call for action and protest, globally, against this gymnophobic Myrtle Beach city government.  No shopping there.  No stopping there, not even for gas.  We as American citizens need to take economic responsibility, take back our civil rights and financially cripple the City of Myrtle Beach until the bans on nudity are gone!