At least nine tornados hammer CSRA over weekend, including Barnwell County’s strongest since 1983 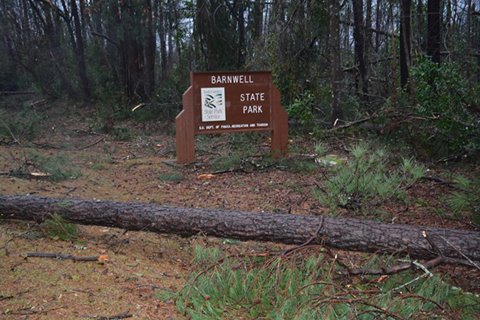 The hardest hit counties were Bamberg, Barnwell, Orangeburg and Screven.

Until Sunday night, SOLOMON BLATT AV (SC 3) – which is also known as the BARNWELL-BLACKVILLE HY – was closed to thru traffic. WHITETAIL DR was the designated detour.

The (Barnwell People-Sentinel) shared photos of the damage on their Facebook page.

That tornado then tore through Denmark and Finland along COUNTRY CLUB RD (SC 70). An unidentified Blackville woman was taken to Aiken Regional Medical Centers with unknown injuries after being trapped in her mobile home after it was destroyed on PLEASANT HOME RD (S-6-191). The tornado traveled 14 miles and was rated EF-2. It was the most intense tornado to hit Barnwell County since April 23, 1983.

Another tornado formed on SC 70 (Binnicker Bridge Rd) on the South Fork Edisto River at the Bamberg-Orangeburg County line and it too cut a path of destruction as far as the eye can see. SC 70 is still closed. Denmark residents who want to go to Orangeburg must take US 321 to the Neeses Hy (SC 4) or go to Bamberg on HERITAGE HY (US 78) and turn left on to the MAIN HY (US 301/601).

And those were not the only tornados in either Bamberg or Orangeburg counties. In fact, two more tornados hit SC 70.

Another tornado slammed far northwestern Bamberg County, near the Sunshine community or 2.5 miles west of Sweden. This twister formed on DALLY RD, near its intersection with SPRINGFIELD RD (S-5-29).

In Burke County near Waynesboro, a tornado hit near Georgia Highway 24, destroying sheds.

The initial two tornados in the area occurred in Screven County: one near Woodcliff and another northeast of Sylvania City Limits.

The clean up efforts continue locally. For the homeless, it will be getting colder come Friday morning.

2 Comments to “At least nine tornados hammer CSRA over weekend, including Barnwell County’s strongest since 1983”