Now, we got some reasons not to use GiveForward 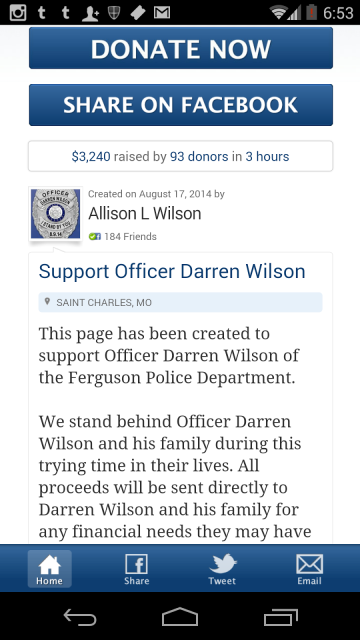 CHICAGO — Well, turns out, crowdfunding is a playground for coddling abusers and murderers.

Another pro-War Machine GiveForward appeared, just over a full day after we at Aiken Area Progressive were instrumental in getting rid of a previous GiveForward that blamed domestic violence victim Christy Mack for her own abuse.

For the remainder of the post, we will be issuing a trigger warning for abuse, victim-blaming, and support of killer cops.

Here is the part of the “mission statement”(?) of Give Forward, as cut by Kitty Stryker:

That is a very vague mission statement if it is one.  But, let’s rewind a little bit, shall we?

Ms. Stryker looked back at the checkered history of crowdfunding and their horrifying treatment of sex workers.

As I’ve discussed before, sex workers have regularly had their attempts to crowdfund medical care, travel, and other things shut down because they’re sex workers, or have ever been sex workers. The purposefully vague language of the terms of service for many of these companies means they can determine what’s “too adult” seemingly on a whim. I’m glad to see Christy Mack hasn’t had her medical fundraiser challenged due to her profession, as Eden Alexander did, and I hope that crowdfunding has made a decision to stop penalizing sex workers for their jobs.

She then goes on to echo my sentiments when I got word of other pro-War Machine fundraisers popping up in the past two days: outrage and disgust.

As we noted, War Machine (real name Jonathan Koppenhaver), 32, was arrested by Simi Valley, Calif. law enforcement on Friday afternoon.  Since that time, we have successfully challenged one of his fundraisers and are challenging more with the help of Ms. Stryker and others who are sex workers and, more importantly, victims of intimate partner violence.

As of this writing, only two of his fundraisers were shuttered (with one reappearing in sockpuppet-style as a “mental health” fundraiser – but I know what this is all about), and the statement GiveForward gave to me is the same less than compassionate canned messages that Ms. Stryker got (photos of her messages here, here and here):

Remember the mission statement we posted above that Ms. Stryker snipped from (presumably) an Android Tablet that had the Dolphin Browser on it.  The second sentence from that statement reads:

We like to focus on fundraisers that empower compassion.

Well, we can say that sentence is horseshit.  If GiveForward wanted to show compassion, they would not coddle abusers, or murderers for that matter.

Speaking of the latter, Ms. Stryker got a photo from GoFundMe, which is another crowdfunding source that has been hostile to sex workers as of late.  It is a fundraiser for Deputy Darren Wilson, who slaughtered Michael Brown, 18, from nearly 12 yards away, as an autopsy on Sunday showed.  That screenshot is at the very top of this post.

Even more disgusting is what Ms. Stryker reports: Deputy Wilson’s fundraiser is north of $17000.00 as of this post.

It also does not surprise me that cops sympathetic to a group of terrorist cops in Ferguson, Mo. are making the donations.  What’s more, this fundraiser has been reported numerous times to GoFundMe and they have not done jackshit about it yet.  It confirms that every last one these cops supporting Wilson are no different than the Ferguson cops who committed numerous acts of domestic terrorism against their own community since Wednesday, August 13.

We must take Ms. Stryker’s advice and use Tilt as your source for fundraising.  Blacklist GoFundMe and GiveForward.