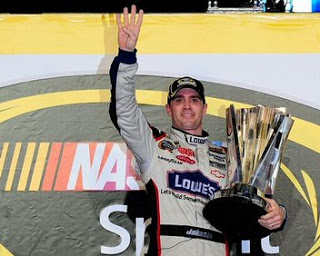 As I mentioned on my Facebook status, there is no time for sore losers.

Yes, those who are not fans of Mr. Johnson are losers, but none of us can act like sore losers and try to spoil Mr. Johnson’s day in the sun.

That’s the difference I was getting to with my Facebook status.

We can appreciate all that Mr. Johnson has done, knowing that he will be brought back down to Earth before he has a chance to match Frank Kimmel’s ARCA record of eight consecutive championships in stock car auto racing.

You may have seen the celebratory mood at the Lowe’s stores on 2470 WHISKEY RD in Aiken or 1220 KNOX AV in North Augusta at approx. 18:41 on Sunday.

Too bad that hardly anyone appreciated Mr. Yarborough’s accomplishment from 1978-2007.

Let’s hope that both Mr. Johnson’s supporters and detractors appreciate this moment as it is unlikely to be repeated in our lifetimes.